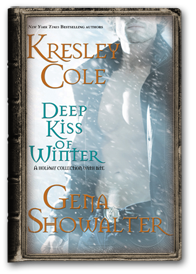 I don’t know how many of you read that I absolutely love Kresley Cole’s IAD series. I was actually starting to read again one of the previous ones (Dark Desires after Dusk) when I got a call fromAlgoritam that a new one by KC arrived. 🙂 Yeey! This one is Dark Kiss of Winter in combination with Gena Showalter (who I haven’t read yet but will soon because I keep reading good things about her). Anyway, Untouchable is the story of Daniella (the Ice maiden/queen who is half Valkyrie, half Icere fey) and Murdoch Wrath (a good vampire – there are bad ones as well in this world), the last of the 4 Wroth brothers to get his love story. That does not mean there will be no other books in the series. Oh, no. There are Valkyirie, vampires, demons, witches and all other kinds of creatures turning up in these novels and of course, they are all immortals, meaning they won’t die of natural causes but can be killed (not easily though).
What I love about KC novels is that they are so unpretentious, easy to read and the dialogues are totally funny (sometimes going into absurd but in a positive way). I can’t wait to read the next one that is to come out in February 2010. There are several stories I hope she writes, although whatever she writes, I’ll be reading it. Some thing just can’t be helped. 🙂
Anyway, back to the story. I have to admit, I felt like an idiot after I read the final paragraph where everythings turns out right. I don’t want to say much about the story, but the heroes have a serious problem consumating their desire and when the solution presented itself – I thought to myself – What an idiot! It was so logical and obvious if you actually used your brain. Which, as you can see, I did not. 🙂 I wonder how many people thought of it before it was actually announced.
As usual, the book is intertwined with stories and characters from other novels because they are all happening at about the same time, getting prepared for the Ascension.
So, if you’re looking for something witty, interesting, a bit different and containing a love story (with some hot sex scenes), Kresley Cole should be your first choice.