I was away for the weekend, otherwise I would have written about it on Saturday ASAP. 🙂

It was great fun and I was a bit surprised to find myself nodding to many things Mr. Roucel discussed. I somehow thought perfumers were more than just real human beings one could have a fun conversation with.

It was supposed to be a talk on the subject of Noir perfumes but the discussion spontaneously moved on in  another direction and we got to hear Mr. Roucel give his opinion on many subjects.

He makes a lot of sense and sounds very down-to-earth and realistic in his thoughts on many different perfume  subjects.

Some of the things he mentioned:

“Oud is fantastique!” – as he went on to explain it has so many different facets and is therefore a good material to work with.

“Perfume is about smelling good” – and not about sex (on the subject of how fashion perceives perfumes these days).

And he loves Suskind’s Parfum – thinks of it as a work of art actually, which makes me ashamed to admit I haven’t read it yet.

Anyway, I would say Mr. Roucel has a new fan club in Zagreb now (as evidenced below): 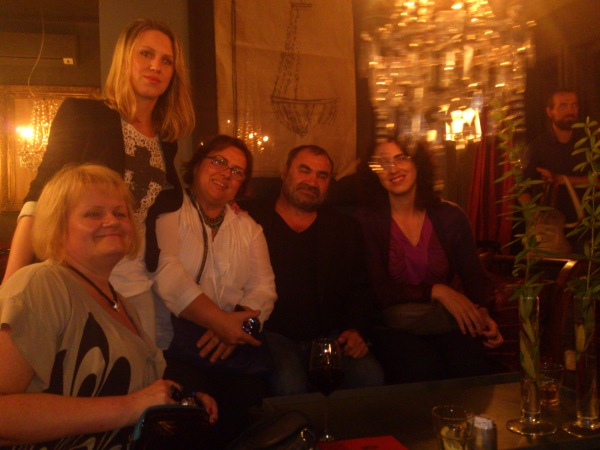 A quick photo session at Velvet

The chandelier getting in the way

One blurry photo with me

And before you all go thinking I had a chat with Maurice, it was just two sentences in which he asked what I was wearing, to which I happily replied L de Lolita Lempicka. 🙂 My little perfume company all wore Mr. Roucel’s creations in honour of his talk.

P.S. I made a video with my phone, some 20 minutes of the talk . I’m trying to make it available on request (it’s still in the process), I will not be posting it publicly though.