My hometown might not be Paris, London or New York but we do have our share of niche perfumeries. 🙂 Thank God for that.
I don’t how many people will visit Zagreb and decide to to go niche perfume shopping, but in case some get the urge, I decided to do a series of posts after visiting each of the stores. Those visits might prove a bit hard on my credit card account but will certainly make me happy, like the one yesterday to Viktor Koncept proved to be.
All the shops I plan to visit are located in the centre of the city but since that is a relatively large area, I am attaching a map to the address, Kralja Držislava 10.
Viktor Koncept is not only a niche perfumery but as the name might indicate, also a concept store. I wasn’t interested yesterday in perusing the rest of the store that contains clothes, shoes and accesories for men and women, and some cute house accesories as well (I checked those the last time I was there).
I have to admit, I wasn’t there for quite a while, so I got terribly upset with myself after entering and discovering that they have significantly improved their offer with new lines. I mean, I know why I didn’t go (trying not to spend money) but I still should have. At least there is still time to change that and try everything I find interesting, or the SA finds interesting. I didn’t achieve a rapport with the lady there but she was still nice and at some point in time, seeing my obvious interest, presented some of the Comme des Garcons fragrances I might find interesting (I was mostly focused on them yesterday). 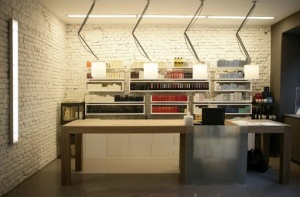 My most pressing concern in going there yesterday was trying the L’Artisan’s Vanillas since I know Viktor holds the line. They still didn’t have the Havana Vanille on offer but had one bottle left of Vanilia. So I tried the Vanilia and while I was discussing my wish to compare it to Havana, another SA came and said that they just got yesterday the sample and if I wanted, they could spray it for me to try. I mean, what they had was a 10 ml decant bottle, not the actual sample bottle. Not only Havana Vanille, but they also had a small bottle of Al Oudh as well. 🙂 And of course I tried that one as well. What can I say – I’ve learned to appreciate and respect ouds but I still have a problem wearing them. I had no more space on my wrists so I only tried a strip of this one, but that was enough. I not only find it wearable, I find it sexy of all things (I’m not sure if that was the intended idea). It’s obviously an oud fragrance but it is so much more (it takes you to faraway places that speak to your soul and seduce you).
This oud is going to find it’s way to me sooner than later. 🙂
Actually, this was not the point I was trying to make, I got sidetracked by oud.
After spraying Havana Vanille on a strip and smelling it, it was obvious straight away that this was not the vanilla I was going to take home. I got hit by sweet vanilla, rum and dried fruit and had to remove it from my nose straight away. I am planning to give it space on my wrist in the future but I’m not holding my hopes up for it. I do understand now why people are upset that Vanilia is going out of production. But my bottle is safe now. 🙂
This is turning into a long post. 🙂 So, to get to the point. If you are interested in tracking down the following lines in Zagreb, Viktor Koncept is where you can find them:
– I already mentioned L’Artisan and CdG
– Parfums de Nicolai (including home fragrances and lovely bottles for holding them)
– Etat Libre d’Orange (no Fat Electrician yet)
– Penhaligon’s
– Byredo (and candles)
– Villoresi
– Carthusia
– Juliette has a gun
– Escentric Molecules
– Boudicca
– Parfum D’Empire
– Maitre Parfumeur et Gantier (can’t wait to try them)
– Parfumerie Generale
– Parfum d’Orsay
– and lastly, they have Cire Trudon candles.
My appetite for discovery is only whetted now. I plan to visit in a month or so (just before Christmas) since that’s around the time they are expecting some new additions (like CdG Daphne, Penhaligon’s Amaranthine and I have high hopes I might find Al Oudh then as well).
Come back next week and see what else can be found in Zagreb.
Pictures by: Viktor Koncept facebook page.

One thought on “Perfume shopping in Zagreb – Viktor Koncept”