Well, now I certainly understand why people who read the book were upset with the movie. 🙂
After reading the book, I can say the movie is rather loosely based on the book.  I’d say the title comes the closest. 😉

Ok, that was mean of me as I enjoyed the movie and I did recognize some parts of the book that I saw in the movie but really, the movie doesn’t come close to what’s in the book (then again, what movie does?). Actually, it veers off in a completely different way.

But I want to talk about the book and not about the movie. The book I would highly recommend to practically anyone. Because the most important thing that comes out of this book is the rather good (and bleak) depiction of everything that is wrong with the world today.

The story is based on interviews with particular survivors, several years after the end of the World War Z and some of them are actually scum. Not many but there is no problem picking them out. Surprisingly, all of them are either rich or in power! Can you imagine that? 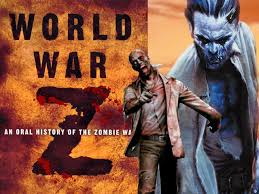 The way the interviews are slowly progressing gives you the image of what and how it all happened.

If you are like me and think that a book that’s based on interviews with people cannot come close to an interesting read that you will devour, well, you would be (like me) very wrong.

It’s fun how the introduction is the explanation on how this book, from the fictional point of view of the interviewer, came to be. And how he had access to many important people after the war.

I don’t want to go into details about the story but what is rather obvious is that Mr. Brooks did some great research in writing it and I, for one, actually learned a lot in general about the world we live in.

The thing is, zombies aside, this book is a very good warning against what we as humans are capable of doing to ourselves, destroying the world we know because of our greed and power cravings.

That is why World War Z is scary.