This week’s questions were provided by Andrea, The Little Red Reviewer.

It’s becoming obvious we’re heading towards the end, I feel a bit raw with this week’s discoveries.

Let’s start with the Espara timeline. 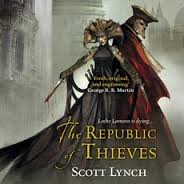 1. We finally know why Sabetha dies her hair, and that’s so disturbing even the Thiefmaker under Shade’s Hill was disgusted by it. Too dark for this world? Or just right?

Nothing is too dark for this world it seems. But it was almost vomit-inducing. Seriously?! How do people come up with these ideas?! And I would guess it might not have been an actual idea of Mr. Lynch, unfortunately, I wouldn’t be surprised if something like that actually happened during human history.

Hope they burn in hell.

2. The “Asino” brothers are drunken idiots, but they’re not blind. What did you think of the little rendezvous they helped arrange for Sabetha and Locke?

Yaaay! They have good hearts and teenage hormones. Those aren’t mutually exclusive, the heart just might not have time to do its job under all that wine most of the time. 😉

3. Locke managed to get everyone out of the Boulidazi mess we discussed last week . . . what do you think of this latest  Boulidazi complication?

A little rock in the road. 🙂 After the kiss, I think this will be easy. Then again, it might blow up in their faces. Who knows with Mr. Lynch…

And back to Karthain (I’m jumping around in time here, leaving the most important bits for last) 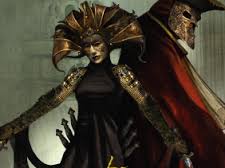 4.Time is flying, and the election is getting closer. Desperation calls for cheap tricks. I think my favorite so far is Sabetha’s special roof guards. What’s your favorite election dirty trick so far?

That was brilliant! Ingenious! I think this is my favorite trick. Because it’s funny.

5.There’s a mole in the Deep Roots. Was that person’s identity a surprise to you? And how did you like Locke’s method of identifying the person?

Well it wasn’t surprise once they caught him – it was obvious he was going to be the double agent for Sabetha. I must say I expected Locke to figure it out sooner. The method was good, but I really thought it would be easier for him to figure it out. Oh well, he did have other things to think about…

6.What’s so important about this Lovaris fellow? The election is right around the corner, so why introduce someone new so late in the game?

Who is Lovaris? I know I read the name and now I can’t remember who he is. Shit. I need to go check.

Oh, yes, I remember. Well, by the end of those two chapters, it seems he is an unwilling participant in a ploy of Locke’s. Possibly. I love the fact that his name makes me think of someone looking for money (lova means money in slang Croatian).

7. It’s so nice that Locke and Sabetha can finally have some nice, normal dinner dates. He even cooks her dinner! But that sneaky Patience, always interrupting everything! Finally, she promises some answers. that’s nice. what, Locke is WHO? Locke is a WHAT? How much of it do you believe?

Basically all, except the fact he is actually the White/Black Amaranth. Or an actual Bondsmagi. Whatever happened, I think he is another person from what Patience thinks. I also agree with Jean when he says she twisted the information she gave him so it would sound as awful as it did.

Here is what my fellow readers had to say about it all:

Over The Effing Rainbow

19 thoughts on “Scott Lynch: The Republic of Thieves read-along #4”