Lindsey Fairleigh and Lindsey Pogue: Into The Fire 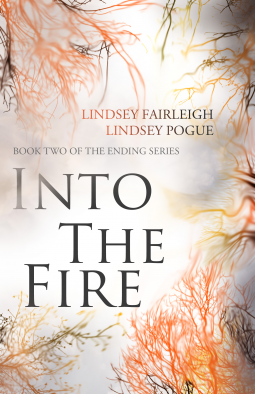 I should warn you before I start, if you haven’t read After The Ending, there will be spoilers.

I feel lucky that I didn’t have to wait long before reading the next book in The Ending series. Although now I’m not sure if I still remembered enough of the previous book or the authors were so good to jog my memory with what happened in After The Ending (knowing myself, I’d say it’s the latter).

The story picks up where it left off and we are introduced to some new characters, some you know will be there (Gabe), some you have no idea existed (because they shouldn’t – Camille and Mase) and some you wouldn’t have expected in your wildest dreams. I’m not saying who. 😉

Considering the fact that After The Ending took our characters on a several months long journey, you will be interested to know this book takes place during one week. Who knew so much could happen in a week? And even though the story mostly switches between Dani and Zoe again, it’s from Dani’s perspective that we learn the most intriguing bits.

And those that would make you scream in frustration.

Also, at some point I really wanted to scream in frustration at both Dani and Zoe – I was just starting to think Zoe was the rational and cool-thinking one, after I got upset with Dani thinking with her heart, and then Zoe goes and does the same. And Dani turns smarter.

I’m blaming it on the fact that they are still young and facing a new world, not on the fact it suited the authors to move the story in that direction.

It was one of those books that make you turn into a reader who calls out for blood for the bad guys. It seems in this case, the BAD guy might be even worse than you thought but we’ll get to learn that in the next book.

So, to sum it up (I always wonder if I manage to convey through my thoughts how much I liked the book) – I practically inhaled it. Through my eyes of course. 😉

I received my copy through NetGalley.

P.S. I just want to add, this book deals with some unethical and immoral choices bad people make. It also deals with how people can act differently when faced with such problems and how difficult choosing the right path sometimes can be. Also, how easy it is for the bad guys to take over. 😦

3 thoughts on “Lindsey Fairleigh and Lindsey Pogue: Into The Fire”

Follow All I am – a redhead on WordPress.com
Join 1,514 other followers