This is the second book in the Blood of Eden series, I’m not sure how many will there be in the end, one more for sure. I was lucky to receive my copy through NetGalley as it’s not yet out.

So, where to start?
I was everything while reading this book – annoyed with Allie (and Ms Kagawa consequently), thrilled, upset, at the edge of my seat, crying, my heart broke for the characters, basically everything. 🙂

Which makes me think the book is rather great even though I had my doubts in the beginning when Allie rather openly displayed what I consider to be a completely wrong view people have of teenagers. But that’s just my opinion.

Here is the blurb:

“How do you face the end of eternity?

In Allison Sekemoto’s world, there is one rule left: Blood calls to blood

She has done the unthinkable: died so that she might continue to live. Cast out of Eden and separated 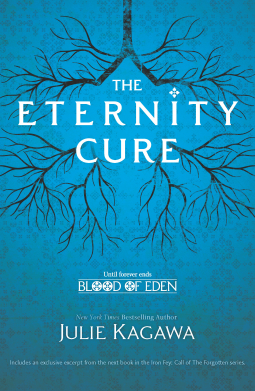 from the boy she dared to love, Allie will follow the call of blood to save her creator, Kanin, from the psychotic vampire Sarren. But when the trail leads to Allie’s birthplace in New Covington, what Allie finds there will change the world forever-and possibly end human and vampire existence.

There’s a new plague on the rise, a strain of the Red Lung virus that wiped out most of humanity generations ago-and this strain is deadly to humans and vampires alike. The only hope for a cure lies in the secrets Kanin carries, if Allie can get to him in time.

Allison thought that immortality was forever. But now, with eternity itself hanging in the balance, the lines between human and monster will blur even further, and Allie must face another choice she could never have imagined having to make. “

Even if you read the first book, this doesn’t tell you that much. After my initial displeasure of Allie’s behaviour, I got immersed in the story and wanted to see what will happen. There were some unexpected turns which I didn’t see coming. (yaay, finally! I love that!)

And then we approached the end and I thought I knew what was going to happen, then I read on and thought, “Oh Ms Kagawa was brave with this ending”, only to have my initial opinion confirmed.
Besides, it’s the one I prefered to the brave one. But I can already see so the problems arising in the next book because of it.
And not to confuse you, I enjoyed the book a lot but it’s dark, gruesome and reminds me a bit of the Passage (you know, post-apocalyptic dark world inhabited by monsters with very little people left and declining).

One thought on “Julie Kagawa: The Eternity Cure”

Follow All I am – a redhead on WordPress.com
Join 1,525 other followers