Sometimes the most unexpected things occur to me.
Although, I probably shouldn’t call them unexpected. It’s just the fact that they haven’t occurred before that makes them unexpected but then again, every idea anyone has could be called that. 🙂

Basically, I realized I hoard my samples and decants. 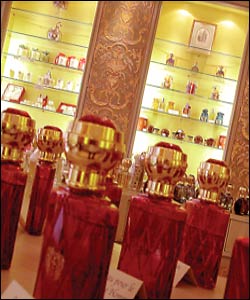 Especially decants.
They are rather small to begin with (compared to bottles) and are either 5 or 10 ml of perfumes I like, and would like to know better (so I can review them).
But that same size makes them rather fleeting, when compared to bottles, so I’m scared of using them, in order not to use them up before I get the chance to write about them.
I realize it’s rather stupid, because if I wore them, I’d have a better chance of actually talking about them than now, when I’m hesitating of wearing them in order not to use all of what I have.

That is also why this winter I’ve been rotating 5 bottles I have in order not to spend any of the decants I have. Which I guess contributes to the winter blues I’m experiencing, but hopefully, now I’m aware of my perfume hoarding tendencies, I’ll be able to combat them with spraying decants with abandon. 🙂
After all, they are a legion. 🙂

Does this happen to anyone else?