As I’ve been reading for 25 years now (since I learned to read, I never stopped, so you can pretty much calculate my age from that), I must say I haven’t yet enountered such a character as Jack Reacher and this type of a crime/action story. 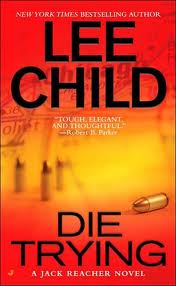 I find I have problems decribing what exactly do I mean by this. It’s true that Jack Reacher has qualities that might be a bit stretched as to be ascribed to one human only, but that might only be my non-military perspective. I honestly don’t know if military around the world employs such geniously varied and intelligent characters, but I keep thinking if they were so smart, they probably could choose better than military.
(am I prejudiced against military or what?) 🙂
The thing is, Jack Reacher did choose in the end against military and now drifts around USA and keeps getting into trouble completely accidentally. Which is how we get to read so many novels about him. 🙂

This one was really interesting as it got into the militia problems and the ways that might escalate into a national (and possibly then a world wide) issue.
The thing that I consider a testament of very good writing is the fact that when Reacher ends up killing some of the really bad characters, I felt vindicated. 🙂 I couldn’t stand those people still being alive and creating so much misery and doing torture. Does that make me a bad person? I mean, I know it’s fiction but, god, they really deserved to die. And not so fast.

And this came on the heels of the tragedy in Norway. What’s wrong with some people?! I just have no words to describe the depth of my disappointment in the mankind. And I can’t learn to live with it. I cannot forget or bury the knowledge and go on like everything is fine with the world. It obviously isn’t.
I mean, the novel I read is fiction, but what happened in Norway isn’t, and what happens in the novel isn’t really stretching the imagination far from some of the things that already happened.

I know we are never going to live in a Utopian world but I do wish we’d get at least a step closer to it and not always getting a step farther and farther away.