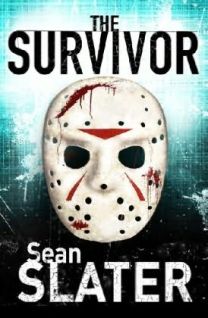 Reading is something I can’t do without. And I’m always buying books, so when one lands in my lap for free, and it’s a crime story (which I don’t read nearly as much as I’d like to), I’m even happier. On my own, it would probably take time for me to realize there is a good crime novel out there, if I were to realize it at all (I’m sure there are many out there I’m oblivious to).

So, what makes The Survivor a good crime novel for me?

Many things but one that stood out from the start and made me so happy was the fact that detective Striker has no qualms about saying his piece to a superior officer who is obviously an *** (I’ll be polite and won’t say what I was about to say). I’m tired of good, honest characters taking the blame heaped upon them by politicians/ambitious superiors/or anything similar (thing in this case being there on purpose)and having to put up with it as part of the job. It makes me frustrated. And I’m just reading it.
Anyway, that’s not the case here and that makes me seriously happy (even though it’s not really relevant to the crimes comitted).

One thing that did make me frustrated though is, are really all teenagers such pain in the a..? Yes, his daughter went through some bad stuff but it’s annoying. It makes me seriously question my wish to have children. 🙂 Although it works wonders for the dramatization.

I’m getting off the subject now.
What makes this book good is the fact I learned something. Though in this case, I wish I hadn’t. The history of our world is full of terrible tragedies caused by humans and one of those is referenced in this novel. I won’t give details because the story is written so minutely precise that each time another detail is revealed, another step toward explanation is taken and everything starts to fit better.
It’s definitely one of the better points of Mr. Slater’s writing (who is btw a Vancouver cop), this precision in revealing details. Also, the real life of a cop is very well described – the private life, the work life and all the life’s little touches are there.
One thing that surprised me though, is the amount of luck needed in investigative work. Or perhaps that is only true in the life of Detective Striker. But my guess is that it’s probably true more often than not in real life as well.

Basic line for me is this – I want the next installment of Jacob Striker story as this one got under my skin. I will be thinking about some of the facts and parts of the story for some time to come. And that is the best any book can do for me because it makes me remember it.

This book was an ARC provided by Simon and Schuster to all participants of the Book Chick City Thriller and Suspense Challenge 2011. And thank you for providing it.

6 thoughts on “Sean Slater: The Survivor”