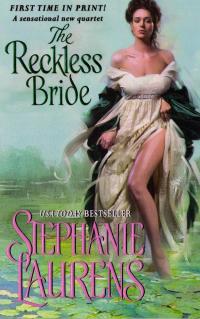 With this book ends the Black Cobra Quartet.

Before I go on, I should warn you there are going to be some major spoilers ahead because I just cannot talk about the finish of this series without it. I really thought about that and I need to get that off my chest.

Anyway, we follow the path from India of the last of the 4 couriers and this one (unfortunately for him) had the original of the letter that is supposed to reach Wolverstone. I say unfortunately because his nickname is Reckless (as is his bride obviously 😉 ) and he now can’t do anything that would be reckless and jeopardize his mission so when asked by a nice old lady (travelling with her great niece) to act as their escort, he accepts as that will of course aid him in camouflaging his mission.
So they set off by European rivers to reach Rotterdam and the English shores. Here is where you know how the love story develops. Which is in S. Laurens’ vein very well done.

Here is where I get to spoilers. As the story progresses through the books, you get the idea that 3 brothers are behind the Black Cobra criminal organization. So, imagine my surprise  when along you find out that two of them are also having a love affair. I thought, oh well, I guess that’s appropriate these days to incorporate in a romance novel as a side story.
Until this book where, what I thought by the half of the book when realization hit is, I’m so stupid for not seeing this before. 🙂 The men employed by the cult never see who is running it, only the upper echelons know and there are like 5 of them. And the name of a cobra?! I really felt stupid for not realizing sooner that the third brother is actually a sister (and btw, they are all half-siblings, sharing only a father).
It seems that only the courageous gentlemen of S. Laurens’ novels are aware of the dangers the intelligent women posess, everybody else underestimates them enormously (me included obviously). 🙂