Charlaine Harris: Dead in the Family 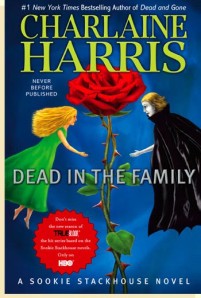 Finally! I got my copy late Friday afternoon and wasn’t able to start reading it until Saturday (and had no pressing stuff so I finished it yesterday evening). I feel like someone lifted a little burden I was carrying since the book came out and I didn’t have it. 🙂

This is not going to be only about the book – I was thinking a lot about the series I was able to watch in between the last book two books in the series. I wasn’t particulary thrilled with the choice of Sookie (Anna Paquin) but now, I think they got it absolutely right. And I’ll tell you why.

When I started reading the series, I thought of Sookie as this really nice blonde girl who just happens to have a problem (she can hear other people’s thoughts) and that makes everyone think she’s a bit crazy (only her friends consider her normal). Anyway, she sounded stereotypically blonde in most ways. And it hit me with this book. I mean I changed my opinion of her character before (she is terribly nice but goes through a lot of bad things) and then I was thinking about the series and who could have starred as Sookie instead of A. Paquin. The problem with blonde actresses is that they all seem nice and gentle and in need of protection, without that inner core of steel which Sookie obviously has and Anna is portraying wonderfully.

So, I’m also looking forward to the new season of True Blood. 🙂 It actually took for me watching the series to realize how dark and bloody these stories really are. It’s never that dark in my head.

On to the book. Since I love the series, I enjoyed it very much – I love the fact that Sookie and Eric are in love (even as complicated as he is). And I loved the Bill surprise in the book (definitely didn’t see that one coming).

The rest was a less bloody Sookie story than I keep remembering from previous books. Maybe that’s because it’s been a while since I finished the last. I mean, there is some bad stuff happening but after the ending of the previous one (where there is the Fae war), this one was a walk in the garden for Sookie. So, the ending was a bit anti-climactic for me even though it ended with a serious fight. Well, it’s Mrs. Harris who has put the bar so high with the previous one.

This doesn’t mean I didn’t enjoy it – quite the contrary. I will be awaiting the next one with the same anticipation as this one. Can’t help it – I love the Sookie world. 🙂

P.S. The previous books I read weren’t mine, a colleague lent them to me. In order for me to explain how much I enjoy them, I plan on buying the whole series to be able to enjoy them again at my own leisure.

2 thoughts on “Charlaine Harris: Dead in the Family”

Follow All I am – a redhead on WordPress.com
Join 1,514 other followers