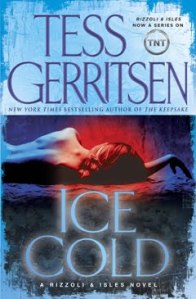 It seems this is the US title (British one is Killing Place).  I really don’t understand why they do that except that it makes me think I missed a book.

I don’t think I ever wrote about Tess Gerritsen. A serious oversight. I enjoy the Isles & Rizzoli series immensely. It’s like an improved version of Kay Scarpetta novels. This now sounds awful but I didn’t mean it like that. It’s just that here except for the forensic pathologist Maura Isles (like Kay Scarpetta), we also have a female police detective Jane Rizzoli (and there’s Pete Marino in Scarpetta novels but he’s a guy). There are many similiraties between the series and both are quite gruesome. But I sort of feel more faith in human nature coming through T. Gerritsen’s books than in Scarpetta. And they both deal with some seriously scary stuff.

For example, this one (Mephisto Club as well) reads almost like a horror story, the way it’s written. It definitely has all the characteristics of a horror movie. Incredible really. And then the story unfolds and even though it’s unfortunately very possible and believable (as in it could happen for real after some bad circumstances piling up on each other but that’s the way bad stuff usually happens), it ends on a relatively optimistic note for humanity. It also displays the fact that most of us are cowards in our daily lives which does not become visible until we are faced with adversity.

I would recommend this series to everyone who enjoyed Kay Scarpetta novels and likes some scariness mixed with the criminal story. I can’t wait to see what comes up next.
And btw, if you are going to read it, start from the beginning.