This was a recommendation on Feminine things blog one day when a discussion on YA books was on. I’m glad I read that post as I saw other books I should add to my ever-growing list of books TBR.

I somehow missed the fact that even though this is the first book in the series, no other books are out yet. I’m a bit unhappy because of that.

The book is a mix of YA, paranormal and romance all in one, so I was bound to love it.

“In a city of daimons, rigid class lines separate the powerful from the power-hungry. And at the heart of The City is the Carnival of Souls, where both murder and pleasure are offered up for sale. Once in a generation, the carnival hosts a deadly competition that allows every daimon a chance to join the ruling elite. Without the competition, Aya and Kaleb would both face bleak futures—if for different reasons. For each of them, fighting to the death is the only way to try to live.

All Mallory knows of The City is that her father—and every other witch there—fled it for a life in exile in the human world. Instead of a typical teenage life full of friends and maybe even a little romance, Mallory scans quiet streets for threats, hides herself away, and trains to be lethal. She knows it’s only a matter of time until a daimon finds her and her father, so she readies herself for the inevitable. While Mallory possesses little knowledge of The City, every inhabitant of The City knows of her. There are plans for Mallory, and soon she, too, will be drawn into the decadence and danger that is the Carnival of Souls.”

As with all briefs, this one leaves many things unsaid. Like, the fact that women are treated as breeding partners in daimon marriages (not that that makes them partners actually), everyone has a secret to keep and pretty much power is dealt through these secrets, everyone is lying except Mallory it seems, 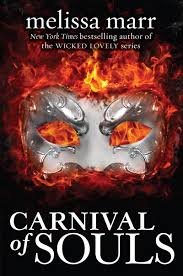 and I sincerely hope as soon as she comes into knowledge (and her own powers), she’ll bring everyone down a peg or two (or a lot).

The problem is, the story is interesting and we are pulled in, only to have it end. Just as the story is heating up, there is the end and now you have to wait for book two.

Which I wouldn’t mind but by the time any book in a series comes out, I forget at least half of what went on in the previous book and I really don’t have either the time or the wish to re-read every series each time a book comes out.

I don’t blame Ms Marr for this  particular problem – all I can is, urge the writers I find interesting and want to read more from, to please write faster. 🙂