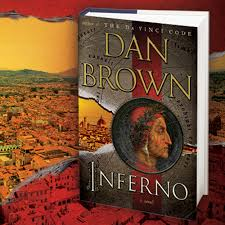 I kept thinking of Dan Brown‘s novels as being similar to James Rollins’ ones but I was wrong (I find Mr. Rollins’s ones much better).

But since I’ve read all Dan Brown’s novels so far, I definitely wanted to read Inferno and see where the story with Dante might take us. I learned a lot again – which is one of the good things about this book.

One of the bad things about this book is that it annoyed me to no end. 🙂 From the beginning to the end pretty much.

All of my initial misgivings about some seriously “stupid” plot parts were satisfyingly explained afterwards (I was hoping for that, otherwise it would have been a serious error on the side of the editor).

I do hope I am not going to give away any spoilers but I found the plot to be consciously misleading for the reader until such time as Mr. Brown decided to let us in on what’s actually happening. First, I had a hard time turning my mind around who did what, then I expected that to be another smokescreen until it seemed at the end, that was it.

Speaking of the end, I’m also a bit unsure of how did that female partnership come to happen so easily but I’m happy with that being the case.

And if you think from the start that this might be a mystically fantastic story, you’re going to be wrong. There is a good, rational explanation to everything (except the reason why every character is SO terribly smart).

I would say that the best thing about this novel is that it tackles one theme that I found scary in an another book I read this year (Frozen Solid by James M. Tabor) and that is over-population, i.e. private ideas and actions on how to curb it. Which are never good.

Inferno makes some good, hard points about the fact that we collectively need to start

thinking about this as rather soon it will kill the planet we live on. Correct term for it being “Malthusian growth model” or exponential mathematics. Very scary stuff and unfortunately very true.

That is just one of the interesting things I learned reading Inferno. One other interesting thing is that it makes you wonder and ask yourself some things that you probably wouldn’t like to answer (or know what your answer might be).

For those reasons alone I would say it’s a book worth reading. Just turn a blind eye to the frustrating parts. 😉 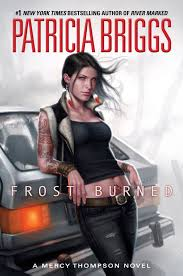 This was a really good choice after my HP problem. 🙂 It seems to me that Mercy Thompson series is getting better with each new installment which is not something I can say for many others. Quite the contrary, several series I enjoyed reading, I read no longer as I lost interest. Or even when I do, they are just not as good as I remember the previous books.

Not so with Frost Burned. Although I admit to forgetting some previous plots in the meantime (or the fact that Samuel had a fae mate?! when did that happen?).

So, while writing this review I went to check the previous books and I realized I have missed River Marked. I just don’t think I would have so completely forgotten so many referenced things in this novel if I had read all of the previous ones. That is why River Marked is on my list just after I finish Inferno by Dan Brown.

Frost Burned starts off action packed and rather thrilling. I know I oftentimes mention my frustration with characters being stubborn to the point of stupidity, and even though Mercy would fit as a stubborn person with her idiosyncrasies, she is never stupid, quite the contrary. So, it can be done in YA novels too (because I don’t find teenagers stupid – albeit Mercy isn’t a teenager but I would say it still applies).

There are many times in the story where Mercy’s intelligence and practicality are displayed and I loved it! The more I know her, the more I like her.

One part that made me smile was when werewolves are being all secretive and the message going around is that there were some “disturbances in the Force”. 😀 I am not a geeky fan of Star Wars but I love cross-references like this.

One other point that I’d like to comment on is the fact that some authors have the ability to make you root for the bad guys to get killed as soon as possible (by the end of the book at the latest if it can’t happen sooner).

I could mention many things I enjoyed in this book – like how it made me think how our early religious beliefs (well, they are not exactly ours when we are children) but how they can influence your adult life to a painful for the soul point.

How being evil is not exclusive right of the male gender.

Basically, I can’t wait to finish Inferno so I can go to River Marked (as it’s making me a bit upset at some points). 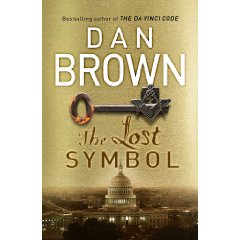 I wasn’t planning on reading The Lost Symbol so soon because I was waiting for it to come out as a paperback. I’m really not that thrilled with Brown’s work to be buying it in hardcover. But my very impatient colleague does not have such problems, so on Friday, I got his copy to read. Well, as you can see, I’m already writing about it on Monday. 🙂 I enjoyed it, as I did Angels and Demons and The Da Vinci code but in a fun, fictional way as I would watch a Hollywood action movie made exclusively for fun.
I still can’t understand what the hype was about regarding The Da Vince code. It’s not like DB wrote about anything new, I mean I already read books on the topic years before that. But I guess when large portions of public who usually don’t read get a hold of such “bombastic facts” – it all turns into a circus. I honestly don’t bother with distinguishing “factual” from non-factual in Brown’s books, I read them to have fun. And they are good if you are interested in improving the general knowledge by reading additional titles and authors mentioned in the books.
This time, Robert Langdon is not trying to discover the lost descendants of Royal Blood (so as not to give a big spoiler to individuals who haven’t yet read the book and plan to – if there are any left). This time Mr Langdon is included in the hunt for the biggest Masonic secret there is. Of course, it cannot be so easily found and Mr. Langdon being a scientist is quite sceptical this time around in the search of a legend while all the Masons in the book (and some non-Masons as well) are trying to convince him that the legend is real. Anyway, the whole book sounds like an advertisement for the Free Mason society, brotherhood, whatever they are. I didn’t know there was a female version as well.
While they are looking for the Lost symbol (word, legend, myth), I was trying to figure out what it might be. The whole book is about how humans have godlike potential and how that idea crops up in every religion and how focused human thinking can achieve much. I didn’t guess what it was in the end, and have to admit I was a bit disappointed but it made sense so I’m not bothered that much. I won’t say what is the solution but I can give you my thoughts on the subject. I thought that when they discover what they are looking for that it’s going to be an idea we (humans) have to follow to discover our potential so my guesses were love, or prayer. The thing is there is so much mistery surrounding this legend/symbol that in the end when you find out what it is you cannot understand why would they be hiding it when it is readily available and it has nothing to do with being a masonic discovered secret that is suddenly going to change the perception of that symbol. But hey, I didn’t write the book, so I’ll go with the idea. It certainly is a valid one.
Picture by: http://www.amazon.co.uk
P.S. I completely forgot so I’m adding it here. I just started reading the book, and there we are – the Croats. 🙂 Right from the start (and that’s where we’re left). Robert Langdon does not wear a cravate because for him those are symbols of modern mercenaries from office fields – what Croat mercenaries used to wear when going into battle. 🙂 That is btw the origin of the cravate – the Croats did wear a type of cloth tied around their necks and were known by it.