Rick Riordan: Percy Jackson and the Olympians, The Lightning Thief 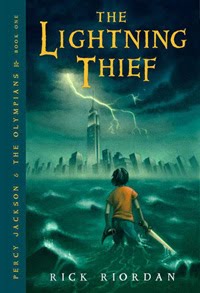 I think I should have joined a YA book challenge considering the books I’m reading lately. 🙂 The shelf with YA series in my bookstore is getting bigger and bigger, so when I read about this series (and the movie that will be here soon) last week, I went to check if they had it, and of course they did. I only took the first book, just to make sure it was going to be something I will like reading and as you can probably guess from the introduction, I will be heading there as soon as possible for all other installments of Percy Jacskon. 🙂 Who would’ve guessed?! 😉
It seems that the Greek gods have entered contemporary fiction big time. My first contact was through Sherrilyn Kenyon and there was someone else in the mean time between Sherrilyn and now Rick Rordan but I can’t remember who at the moment.
And there is that other movie about to hit the cinemas, also having to do with ancient Greek monsters and stuff. 🙂 I found it – Clash of the Titans.
All these certainly make for an easier learning of the Greek mythology, if nothing else.
On to the young Percy, who is 12 in the book, but looks a bit older in the movie trailer. I wonder what changes will there be in the movie (and there will be, no doubt).
So, he learns he is the son of a god (I’m not going to say which) but his mother has never told him that – he’s about to learn it the hard way. He is also dyslexic, which is normal for demi-gods (there is an explanation in the book, quite interesting). In this first book, Percy learns who he is and who his father is, and since his father is in the middle of a dispute that might lead to war, Percy and his 2 friends set out on a quest to settle the matter. The book is fun and easy to read and really full of interesting mythological facts (I mean, it’s mythology and cannot be factual, but you know, facts as they appear in the Greek mythology).
I’m not going to say anything more except if you like to read, try this as light reading, and I am going to see the movie, I believe it’s going to be a lot of fun.
Pic by: /www.rickriordan.com

5 thoughts on “Rick Riordan: Percy Jackson and the Olympians, The Lightning Thief”

Follow All I am – a redhead on WordPress.com
Join 1,525 other followers